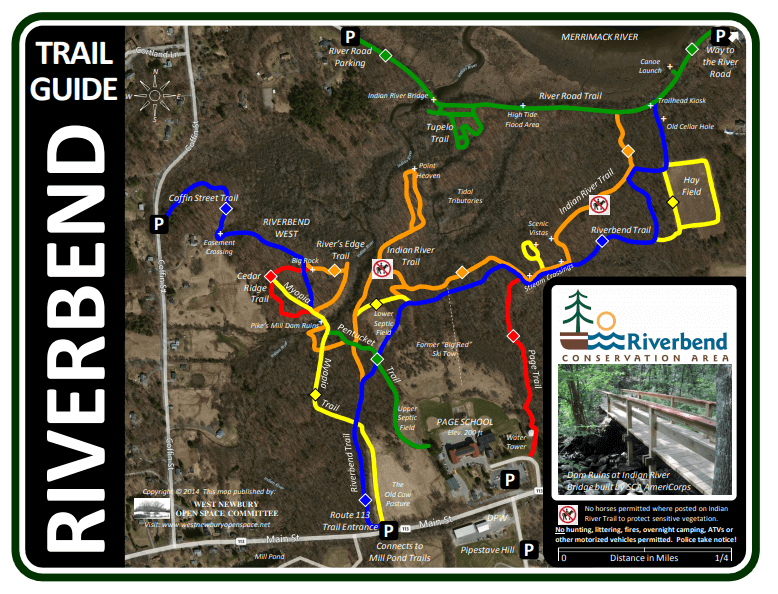 Acquired in 1997, Riverbend Conservation Area is 68 acres and consists of gently sloping forest, wooded wetlands, a former agricultural field, plus a freshwater tidal marsh extending inland from the Merrimack River and includes a portion of the Indian River. The freshwater tidal marsh is one of the few such places remaining in Massachusetts. This property abuts Riverbend West, also called the Page School property, which contains 129 acres of town-owned municipal land. In 2010, a public trail easement was added to a development on Coffin Street, providing access from Coffin Street to the Indian River Dam Ruins, a very scenic and historical spot in the heart of this forest.

During the Spring thaw as well as during periods of heavy rain these trails can become flooded.

From Mill Pond’s upper parking lot, cross Route 113 to enter the trail. The old cow pasture was part of a dairy farm used by Mingo family, who purchased the land in the 1930s. The property was previously owned by E. Moody Boynton, who was the inventor of the crosscut saw and monorail. The trail crosses several stonewalls built by settlers in the 17th and 18th century. The remains of a former ski tow used from 1960 to 1972, can be found which extends to the summit just below the Page School. The trail travels east and links to a large hay field, ideal for cross-country skiing and horseback riding. The old cellar hole is the former Griffin Home Site built in 1729. Rumors have it rumrunners used the foundation hole during prohibition.

An ancient trail once used by Native Americans to reach summering grounds on Plum Island. Rare wild rice paddies can be seen growing along the Merrimack River. The bridge spanning over the Indian River was built in 1999 and allows foot, bicycle and equestrian crossings. The bridge and Tupelo Trail which is off of the Riverbend Trail provide a beautiful, quick visit to one of the most scenic places in West Newbury any time of year.

This footpath begins at the Merrimack River and meanders thru the Riverbend forest over to the Indian River. The trail follows rare freshwater tidal estuaries, first protected in 1686 to “be free as far as the tide flows for the passing and re-passing of boats and canoes.” The trail passes thru virgin stands of oak and beech trees and reaches a scenic point where Native Americans once used this location as a canoe stop and campsite. The trail ends at the remains of a former sawmill and dam, built by Sgt. Joseph Pike in 1706. To help protect sensitive vegetation, no horses are permitted.

From Pipestave Hill’s parking lot, cross Route 113 and enter the trail next to the water tower. The trail is fairly steep as it goes down the hill, where it eventually joins the Riverbend and Indian River Trails.

A new trail network was added in 2013 connecting Coffin Street to the Indian River Dam Ruins. This trail features a 50′ boardwalk crossing wetlands thru a newly acquired public trail easement. The Myopia, Cedar Ridge and River’s Edge Trails merge at the bridges crossing the Indian River, where the former dam and dike is located. Named in honor of the high school seniors who carried the bridge materials to the site, the Pentucket Trail provides a direct, albeit steep, route up to the Page School with better access to Route 113. The boardwalks and bridges were built by SCA AmeriCorps in July 2014 using Town CPA funds.